Amit Sadh celebrates 1 year of Breathe into the Shadows; hints at arrival of next season

Actor Amit Sadh recently took to his Instagram handle and thanked his fans for loving his series, Breathe into the Shadows as it completed a year. 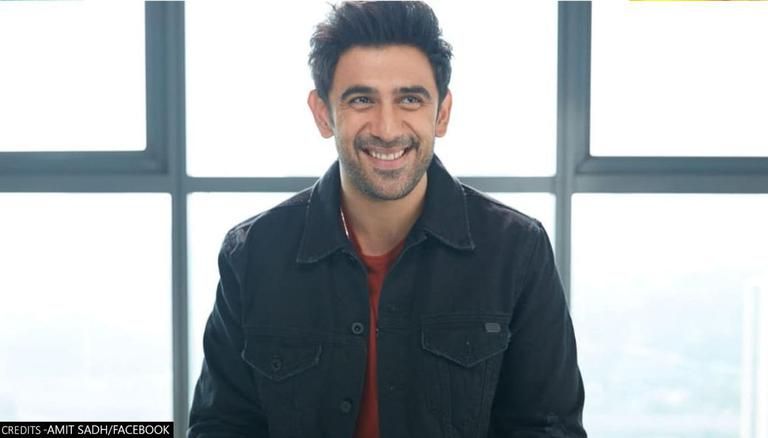 
Amit Sadh, one of the prolific actors of the entertainment industry recently dropped a hint about the arrival of the next season of his thrilling web series, Breathe Into the Shadows. The actor shared the blissful piece of news on the occasion of the series completing one year. He even thanked all his fans for all the support on behalf of the entire team and wished to see them soon.

Amit Sadh celebrates 1 year of Breathe into the Shadows, hints at next season

Taking to Instagram, actor Amit Sadh shared a video clip from his highly loved Amazon web series, Breathe Into The Shadows as he celebrated one year of the show. In the caption, he acknowledged his fans and stated, “Couldn’t have happened without your support. I thankyou you all on all our behalf. See you soon.” He even gave a glimpse of how the first season was and added, “A world where unexpected is the norm! Celebrating 1 year of Breathe Into The Shadows.” He also tagged all the cast members of the series in his post.

As Breathe into the Shadows received amazing reviews from the audiences, fans were delighted to know about the arrival of the new season. While those who were confused kept on confirming whether there will be a new season or not. Some of them also shared how they were curiously waiting for the next season while others asked the actor to reveal more about his upcoming ventures. Take a look at some of the fans reactions to Amit Sadh’s Instagram post. 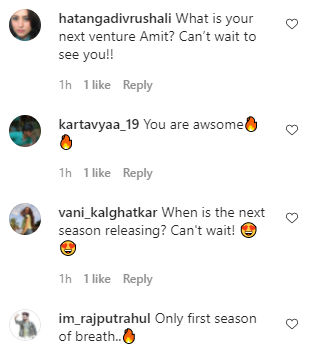 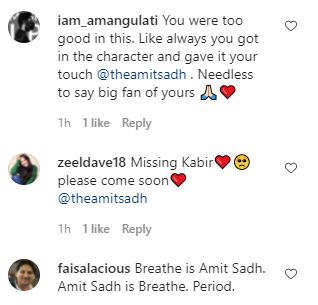 Breathe Into The Shadows

Created and directed by Mayank Sharma, the web series began streaming on Amazon Prime Video on July 10, 2020. The plot of the series followed the life of a man suffering from multiple personality disorder who kidnaps her own daughter and demands to kill a man in order to set the girl free. The cast of the series included some of the popular actors namely Abhishek Bachchan as Dr Avinash Sabharwal/ J, Amit Sadh as Kabir Sawant, Nithya Menen as Abha Sabharwal, Shrikant Verma as Jaiprakash, Saiyami Kher as Shirley, Plabita Borthakur as Meghna Verma, Ivana Kaur as Siya Sabharwal, Shruti Bapna as Natasha Garewal and many others. The series was bankrolled under the banner, Abundantia Entertainment for Amazon Prime Video.